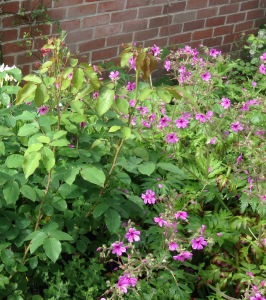 This is an all too inadequate photograph of Geranium palmatum which grows in the Canary Islands, and is new to me. It is a big plant and carries its flowers on erect stalks well above the foliage. It likes dryish conditions and some shade. Seeds very freely.

This one is G. maderense, from Madeira. More spectacular than G. palmatum, but less hardy and less tolerant of wet. It would probably survive outdoors in Norfolk, but would serve to cheer up a polytunnel in the West Country. It grows pretty big too.

Jane Schofield:  Ooh yes, is that the one that makes a big cone of old stems to protects itself over winter?

Edward Verner: Yes it’s G. maderense that does that. I found a really thorough blog post comparing the two species, at https://frustratedgardener.com/2012/06/06/geranium-palmatum-versus-geranium-maderense/

The Layout/Structures page is divided into

The Plants page is divided into